On the Dangers of Spiritual Gastronomics 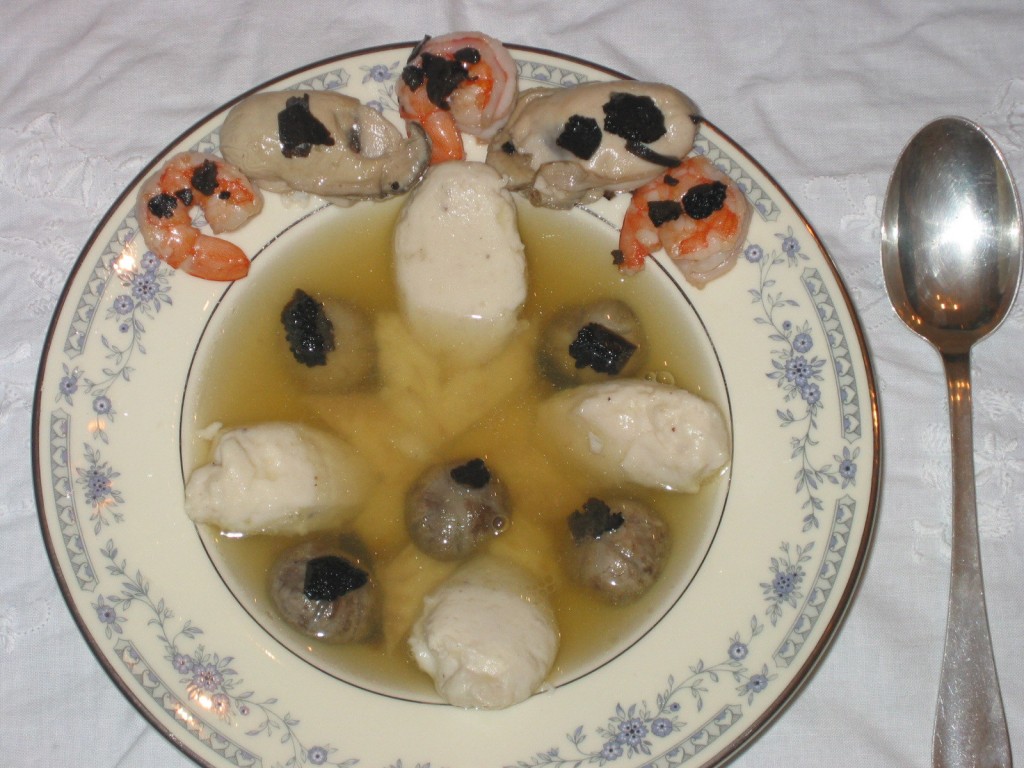 Friends, I’m pleased to announce my website is currently being redesigned and will emerge gorgeous from its chrysalis – thanks to web designers Ernesto Buttafoco and Annabelle Adie– sometime late March or early April.  In the meantime, I’ll be keeping quiet on the blog front.

But before I tune out, a word about Lent.  The season of paring down portions kicked off last week on Ash Wednesday.   Sunday, my son and I went to mass and were handed a Menu Gastronomique – Spirituel.  It was penned by a priest who was formerly a gastronomic chef.  As the story goes, priesty chef had no religious inclinations whatsoever: he believed primarily in cuisson à la nappe and the art of croustade.  But one of the sous-chefs managed to lure him to Lourdes, the Great Catholic Disneyland where Suffering indiscriminately shakes hands with all, and it was in God’s amusement park, washed by the waters over which the Virgin Mary appeared to Saint Bernadette (and into which Bernadette took a wee, some report) that this heathen chef underwent a massive conversion experience whereby the Holy Spirit commanded him to toss his toque blanche to the wind and don the cassock. 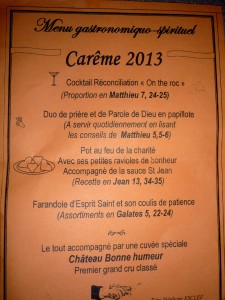 How many blogs out there offer you true examples of French humour?  Not many, Gentle Friends.  Très peu, en effet.

At mass it was business as usual.  On our way in we got stopped by a fervent lay lady who made us buy a purple scarf for two euros – a Lentan initiative promoted this year by the archbishop of Paris.  You’re supposed to wrap it around your neck to help you remember not to take second servings.   My son claimed ownership so I tied it into an ascot for him — quite dashing!

We celebrated the ascot achievement by taking a slug of the Cocktail Réconciliation “On the Roc” – it was a kind of bloody Mary but without the celery salt.  Between the mea culpas – which, like the trou normand, seem to clean the palate; here, the spiritual one – we continued our repast, filling up fast.  All was going well when, to my utter horror, my son started passing gas; I don’t know if it was the “ravioles de Bonheur” or the sauce Saint Jean – perhaps the “Farandole d’Esprit Saint”? – but what is certain is that the Holy Ghost was cranking the poor kid’s entrails.

“Stop it!” I whispered.  “It wasn’t me, Mom.”   “Don’t lie at mass!”  “I’m not lying!  It was you!” “Just don’t do it again, OK?” Our dialectical discussion hardly dignified the House of God, but worse, my son’s Darwin-in-the-garden act continued much to my chagrin and that of the row behind us.  What could I do but plunge my nose in a glass of the cuvée spéciale?

I didn’t dare lift my head till the end of mass when priest asked us to pray for the future pope at which point I elbowed my son and said, beaming so radiantly I could have lit up the Mary Magdalene chapel: “C’est moi!  C’est maman, enfin!”   To have the whole parish praying for me was simply amazing!  It really pumped me up.   “Tu parles!” said my son.  “You just wait!” I replied, catching the eye of Our Lady perched yonder in the Eucharistic chapel. 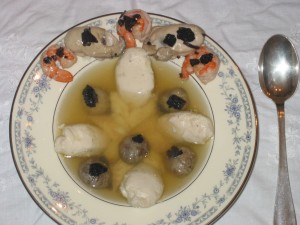