News From the Front Pew- The Kiss of Peas 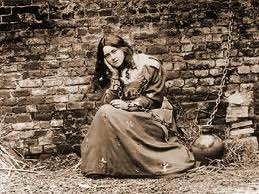 “Jesus said to them: Peace be with you.”

“Eight-year-old Anne said to them: Peas be with you.” 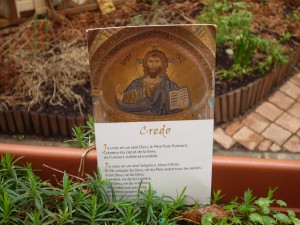 The Pocket Credo in the garden

It wasn’t any ordinary eleven-fifteen mass last Sunday.   Four priests in purple Lentan robes presided over it in full pomp.  Père Boyardee went light on the homily, and that, too, marked a departure from the norm. Then, before proceeding to the consecration of the Eucharist, Père did something frankly shocking.   He pressed the pause button leaving us suspended in mid-mass as he looked out over his pastures and said:
“I ask you now to break up into groups of ten to discuss three questions regarding the Kiss of Peace.  You’ll have twenty minutes to do this after which we will resume the service.  Please don’t lose any time!  Allez, hop!”

Around me no one is making eye contact and no one is moving.  What is going on here, I wonder.   I eye my neighbors more closely and understand immediately: ils font la gueule.  Like sheep herded from a tasty alfalfa pasture to the sheering shed, the parishioners sense this assignment is about to give them the royal shits.  Rising, I follow the example of Charisma, a key lay lady in the pew ahead of mine, and begin pulling out the chairs that have been stacked ahead of time for our study groups.

Charisma hands outs a sheet of paper to those in our precinct; on it are the three questions we are to discuss.

1) What does the kiss of peace evoke for you?

2) How do you understand the phrase, “In the charity of Christ?”

3) Have you ever been an artisan of peace?

I try to herd the parishioners to the chairs I’ve helped set out but no one seems to want to sit down and those who have the discipline to find a seat, do so grudgingly.   A woman in a camelhair coat pushes her chair forward inconsiderately so that it cuts off a part of the circle.  Charisma asks the woman to move it back, but the woman leaps to her feet angrily, mumbling under her breath “Oh! Elle est vraiment spéciale celle-là”

I am beginning to realize just how urgent it is to discuss the Kiss of Peas.

With some gentle cajoling  –Ne vous en faites pas, Madame etc. –I manage to retrieve the prodigal camel coat.  A few more rounds of musical chair and our bracelet of ten beads shuts its clasp.  What would have taken Americans less than five has taken the Frenchies over ten, which means the pressure is on.  We have twenty minutes worth of work to accomplish in eight minutes!  Charisma gets the ball rolling.

“Who would like to tell us what the kiss of peace means to them?”    As no one jumps on her offer, Charisma prods us a bit more.  Many in the circle are looking down at their feet, perhaps seeking inspiration in the appendage so lovingly washed by the Lord.  Charisma’s tone gets almost strident, the parishioners are becoming fidgety and sweaty, a lack of deodorant is perceptible.

“I take the Lord’s peace and try to share it with my neighbor,” Madeleine, the woman to my right, offers at last.

“Take?  Why don’t you say, ‘live’?  We are meant to live Christ’s peace.  It’s not something we can take, is it?” Charisma corrects.

“Oh I take what I can, a bit here, a bit there.  Des brics et des brocs.   I am just a humble servant.  I can’t compete with the Lord.  He was both man and God so in a way He had it easier.”   Madeleine turns to me for confirmation.  I shake my head in agreement:  “A lot easier… ”

“And you, Madame, what do you think?”  Charisma inquires looking at me with an intensity that could make an icon tremble.   She has pinned my thoughts against a wall.  So I speak without thinking.

“It is like being a conduit, receiving the Lord’s love and transmitting it to you neighbor.”  I really have no flipping idea what I’m saying.

“So you say, love?  Is love like peace?” Charisma asks for clarification.

“Love and peace are distinct and yet inseparable when doing the work of the Lord,” I reply. Clearly I am channeling for Saint Theresa – of Lisieux that is, not Avila.

An extraordinary photo of lovely St Theresa in chains

Charisma seems satisfied and moves on to her next catechumen, an African woman holding a baby in a shiny silver astronaut suit. “If you don’t fill with Jesus’ peace you can’t spread it to your neighbor.  You have to let the Lord do it for you.  If you don’t, it’s wrong.”   She bench-presses her astronaut a few times before placing him in burping position.

“It’s a sin,” clarifies her taciturn neighbor from under a cloche hat.

“Yes, that’s right,” jumps in Charisma.  “It’s a sin if you like.  Well, when I came to the realization that God loved me…” Here Charisma closes her eyes to revive the very moment in her inner sanctum. “When I understood just how much He loved me – an overwhelming love! – I understood that He loves each and every one of us in the just the same way, with THAT MUCH LOVE!!”  Charisma reopens her eyes, which are now hard and glistening.  Her voice shifts to a low, grinding gear.   “ And so now when someone pisses me off, when someone really gives me the shits, I ask my Guardian Angel to get in contact with the pain in the arse’s Guardian Angel to work things out, so that we can find peace in our hearts.”

I appreciate Charisma’s franc parler.  She’s beginning to be exciting or at least interesting.  She starts reads the second question to us when the organ pipes burst into a Bach fugue.  We look up toward the pulpit and there is Père, all mighty and purple and waving his flocks back to their pews.

“Vite!  Vite!” cries Charisma.  “Who among you has already been an artisan of peace?  This is the last question – please, someone, anyone, respond!”

“I have,” says the taciturn woman flatly.   We all nod in recognition and stand up.

The dizzying organ music drives us back to the safety of the pews.   Mass resumes back at the altar.

Or so we assume until it becomes apparent that Père Boyardee has still not released the pause button.  “Will our five catechumens preparing for their baptism ascend to the altar?”  He then lists their names.  Among them is a man named Kadhir.

I realize then that this is, indeed, a loaded moment:  by merely dropping a name Père Boyardee has informed the community that he has converted a Muslim.   Since Vatican II, Catholics have been exhorted to refrain from bragging about their successful conversion schemes; these days one cannot be subtle enough.  And yet we all know how immensely indiscreet the tiniest indiscretion can become in a room of silent people.   All the trumpets of the crusades sound tinny and shallow compared with the proud, reverent silence that now fills the church as we watch Kadhir recite the Roman Catholic Credo from a pocket Credo card.

I am filled with an overpowering emotion I cannot name: is it roiling with high notes of anger, low notes of despair and to this troubled music a scene appears on my mind’s eye.   There I stand in a Burkini before an assembly of Muslim elders seated on their calves in a golden domed mosque.  I am to make my profession of Islamic faith but all that I muster is “Holy Moly Guacamole!” 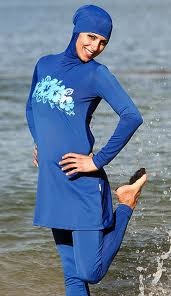 This gal is enjoying her burkini whereas I, my friends, am not!

I feel someone staring at me and look up.  It is Charisma holding out her hand to me.  The Kiss of Peace  — already?    Across Charisma’s hand runs a rosary, the beads, those Marian peas, leave their imprint on my palm.   Charisma squeezes me hard.  “Peace,” she says meaningfully.  “Of Christ,” she adds reverently, watching the words drop into me.  “Be—with– you.”