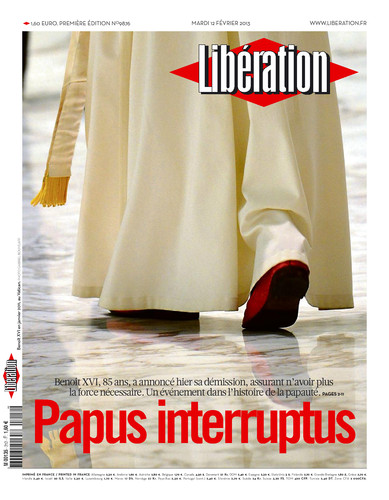 A picture on the cover of Libération this week gave us an apercu of Pope Benedict’s ruby slippers.  They are courtesy of Prada and GORGEOUS though I can’t tell if they are indoor satin or outdoor leather. 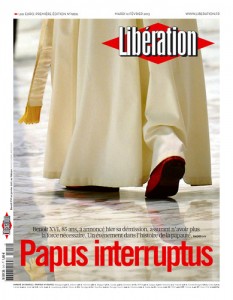 The caption, written by the newspaper’s sniggering altar boys, read:

That’s French humour for you and it’s never better than when in Latin.

Some Libé luminary wrote a soggy column entirely in lyceum Latin on page 3  – a meditation on the physical, metaphysical and altogether fallible nature of the pope (translation on page 11).  Not one mention was made about the popemobile, which really should figure in any discussion about papal ontology as far as I’m concerned.  Could it be that this pedant didn’t know how to say “popemobile” in Latin?

Friends, the news that Pope Benedict will be stepping down gave me such a heady adrenaline rush on Wednesday that I nearly roused the Louvahs to gather their skirts and follow me to march on Rome: Could this be the moment?  To storm the Vatican and grab the throne!  Declare myself Pope Joan II and sleep under the Stars of the Sistine Chapel!  The Louvahs could distract the Swiss Guards (have no fear, Friends, the gulls know exactly how to do it) whilst I slipped into the palace.  Once inside I am entirely confident I’d manage fine with the equipment on hand:  you can knock someone senseless with a censer and Lord knows what you can get up to with nun-made rosary from Poland.   Not that I would necessarily resort to force, Gentle Friends; like many of you, I am a pacifist.  But when you are organizing a putsch you just never know what you’ll be up against. 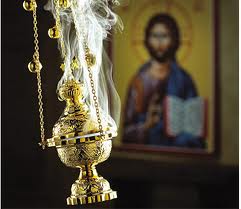 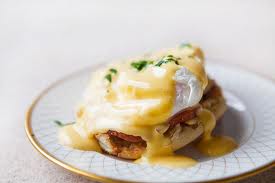 In the meantime I’d like to organize a pre-putsch brunch serving Eggs Benedict!  You are all invited, dear Friends!  We’ll eat off gold plates – I’m making them right now out of papier maché – and drink Mimosas from crystal Our Lady goblets (anyone have an idea where to get these?).   Nothing too fancy, Friends, but good eats to celebrate the radical, awesome, logic-defying, breathtaking, and desperately needed change in store for all of us.

Will you be joining?